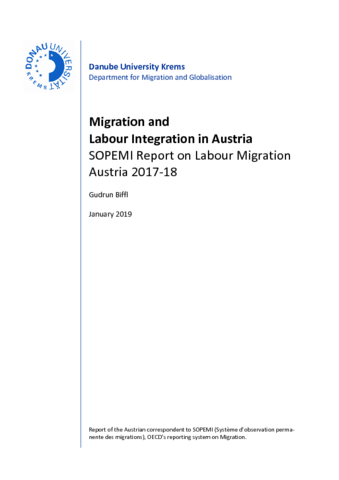 SOPEMI Report on Labour Migration Austria 2017-18: Report of the Austrian SOPEMI correspondent to the OECD

Austrian economic growth picked up in 2017 and reached 2.7%, after 2% in 2016, reaching the highest rate since 2011. The economic recovery had a broad base: not only export growth provided a boost but also domestic demand. In 2018, real GDP growth is expected to remain at the level of 2017 (2.7% on an annual average). The positive economic development is largely due to the acceleration of growth of worldtrade and the good integration of Austrian exports into the international valueadded chains. The world economy continues to be dynamic, driven by the industrialised world (with USA being an important driver) and developing countries alike. In Austria, in addition, the investment backlog of CEECs had come to an end in 2016, partly due to the payment of EU-subsidies, which had been delayed – this was an important driver of economic growth in Austria, given the tight economic interlinkage. The positive export performance was complemented by healthy consumer demand, still profiting from the positive effects of the tax reform, which had come into effect in 2016, and the positive employment development of 2017/18