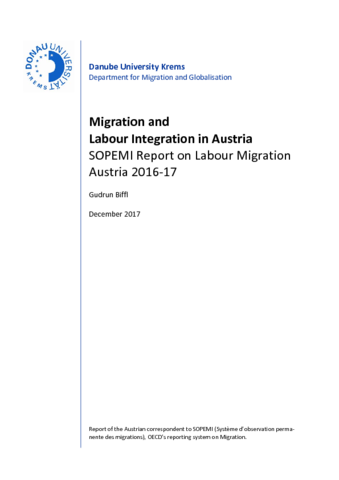 SOPEMI Report on Labour Migration Austria 2015-16: Report of the Austrian SOPEMI correspondent to the OECD

The Austrian economy recovered during 2016 from a weak performance, which had lasted
for over five years. During 2016, GDP growth reached 1.5%, after 1% in 2015 and 0.6% 2014.
Economic growth was fuelled by strong domestic demand, partly flowing from an income tax
reform, partly from a significant rise in public expenditure resulting from the reception and
integration of the pronounced refugee inflows of 2015/16. In 2017, real GDP growth gained
momentum and is expected to reach 2.8% on an annual average, the highest rate since
2011. The positive economic development is largely due to the acceleration of growth of
world-trade and the good integration of Austrian exports in the international value added
chains. In addition, the investment backlog of CEECs came to an end, partly due to the
payment of EU-subsidies, which had been delayed. The positive export performance was
complemented by healthy consumer demand, still profiting from the positive effects of the
tax reform, which had come into effect in 2016.