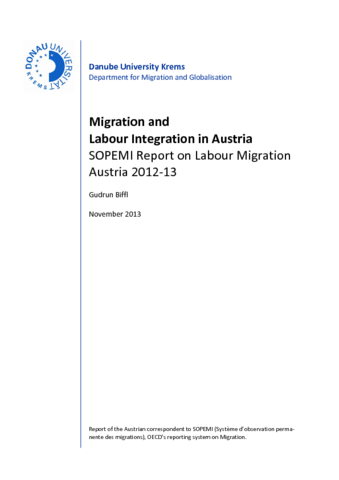 Migration and Labour Integration in Austria. SOPEMI Report on Labour Migration Austria 2012‐13: Report of the Austrian SOPEMI correspondent to the OECD

After the severe slump in economic development in 2009, the Austrian economy picked up in
2010 (+2.1%) and expanded by 2.7% in 2011. In 2012, in the wake of the economic recession
in the Eurozone, real GDP growth slowed down to an annual average of 0.9%. However,
economic growth remained clearly above the average of the Eurozone (EU17: -0.6%) and
somewhat above the rate in Germany (+0.7%) – mainly due to continued export growth and
investment in public infrastructure and housing.
The differentiation of coreperiphery economic growth in Europe, which began in 2010,
became more prominent in 2011 and 2012. Fiscal problems and the debt crisis resulted in an
opening of the economic growth gap relative to the Southern European countries, affecting
Austria to some extent as Italy is a major trading partner (Italy: -2.5% GDP growth rate). But a
steady economic growth performance of the Eastern European EU-MS (+0.9%) and the
important trade linkages with them as well as the Near and Far East stabilised Austrian
economic growth.